Click this link to view and print the brochure

The rule for being safe in a flooding situation is simple: Head for higher ground and stay away from flood waters!

Flash flooding or flooding is possible within the designated watch area - be alert.

Flash flooding or flooding has been reported or is imminent - take necessary precautions immediately.

Flooding of small streams, streets and low-lying areas, such as railroads, underpasses and urban storm drains is occurring.

Several factors contribute to flash flooding. The two key elements are rainfall intensity and duration. Intensity is the rate of rainfall. Duration is how long the rain lasts. Topography, soil conditions, and ground cover also play an important role in flooding.

Flash floods occur within a few minutes or hours of excessive rainfall, a dam or levee failure or a sudden release of water held by an ice jam. Flash floods can roll boulders, tear out trees, destroy buildings and bridges and scour out new channels. Rapidly rising water can reach heights of 30 feet or more.

Furthermore, flash flood-producing rains can also trigger catastrophic mud slides. You will not always have a warning that these deadly, sudden floods are coming. Most flood deaths are due to Flash Floods.

Most flash flooding is caused by slow-moving thunderstorms, as often occurs along the Front Range, thunderstorms repeatedly moving over the same area or heavy rains.

Occasionally, floating debris or ice can accumulate at a natural or man-made obstruction and restrict the flow of water. Water held back by the ice jam or debris dam can cause flooding upstream. Subsequent flash flooding can occur downstream if the obstruction should suddenly release. 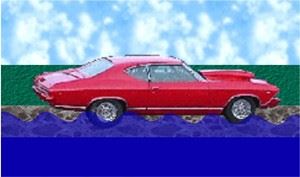 Water weighs 62.4 pounds per cubic foot and typically flows downstream at 6 to 12 miles an hour. 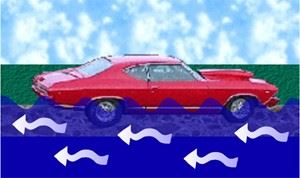 When a vehicle stalls in the water, the water's momentum is transferred to the car. For each foot the water rises, 500 pounds of lateral force are applied to the car. 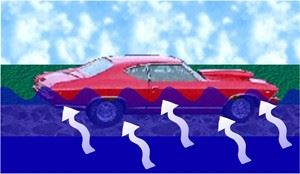 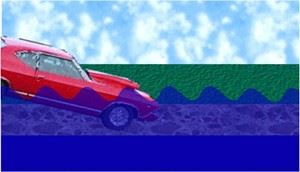 Two feet of water will carry away most automobiles.